BNP is in a politically hapless state for quite some time while they have also lost track in coalition politics. BNP does not even have normal communication with two coalitions—20 party alliance and National Oikya Front.

Leaders of components of the alliances said the parties are running on their own for around two and half years with no unified programmes for a long time. As a result, the alliances exist only on paper.

BNP sources said they are busy restructuring their party’s organisational fold. The party’s leaders have been saying since 2014 that they are preparing to launch a movement after organising the party. The party held its central council in 2016 and some changes were made three times. But these reshuffles did little to stir up the party.

According to information from BNP’s central office, new committees were formed in 47 organisational units out of 81. Convening committees and partial committees still exist in 33 units which expired long ago.

BNP’s assistant office secretary Taiful Islam told Prothom Alo that the Covid situation has had a negative impact on the party’s restructuring activities.

BNP secretary general Mirza Fakhrul Islam Alamgir used to attend the steering committee meeting of the national Oikya Front at the beginning of the coalition. BNP leaders started to skip the meeting at one point. Oikya Front became inactive as the Covid situation engulfed the country.

Many Oikya Front leaders blame BNP for the situation. They maintain that BNP wants to walk alone and the party’s top leadership is confused about the coalition movement. Their observation is that the BNP is still uninterested in street agitation, whether out of fear or other factors.

Mahmudur Rahman Manna, one of the top leaders of the Oikya Front and the convener of the Nagorik Oikya, told Prothom Alo, "We think that NP should come to this point (movement) given reality and people’s demands. If anyone thinks that they will be able to change the regime through elections keeping this government in power, then they will make another mistake. '

Manna said waging a larger movement is a must now but it does not necessarily require forming a coalition.

Simultaneous movement can be launched while maintaining distance, he observed.

This does not mean that everyone has to come to the same stage. Simultaneous movement can be launched separately.

National Oikya Front was floated before the eleventh parliamentary election on 30 December 2018. The coalition consisted of BNP, Gono Forum, Nagorik Oikya, JSD and Krishak Shramik Janata League. Misunderstandings surfaced in the coalition after the election and Kader Siddique's Krishak Sramik Janata League broke away from it. ASM Abdur Rob’s JSD and Kamal Hossain’s Gono Forum were split. Although JSD mended its split, Gono Forum is yet to patch up its internal conflict. The party could not form its central committee due to an internal feud.

BNP’s old alliance, the 20-party alliance, has not held any meetings for a long time. Five parties have already left the alliance while seven parties have split. But all the factions of these seven parties remain in the alliance. Even two top leaders of the factions of the same parties turned up at the same meeting. A leader of a faction has left the meeting seeing other faction’s leader.

Three components of the alliance—Jamaat-e-Islami, Liberal Democratic Party (LDP) and Kalyan Party—are inactive for a long time. There are different speculations about these parties among the BNP men. BNP is trying to avoid Jamaat, while the latter also maintains a distance. These three parties have reportedly grown a bonhomie as they did not take BNP’s alliance with Oikya Front positively. LDP’s Oli Ahmed and other leaders had expressed dissent over it before the election.

Sources from BNP said Oikya Front was formed ahead of the eleventh parliamentary election out of various political considerations. One of the main goals of the alliance was to stir up public sentiment against the government. The alliance also aimed to dissipate the negative notion about the BNP’s long-held alliance with Jamaat.

We are doing groundwork to make the alliances active. We are working on forming greater alliance with all 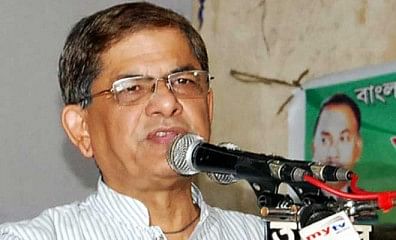 BNP secretary general Mirza Fakhrul Islam Alamgir told Prothom Alo, “The party is unified although its chairperson is not free and acting chairperson is out of the country. We even participated in the election taking two different alliances with us. Everybody knows what the results would have been if the people could have cast their votes. There is no way to underestimate that.”

About the inactivity of Oikya Front and 20-party alliance, Fakhrul said, “We are doing groundwork to make the alliances active. We are working on forming greater alliance with all.”