Quader asks BNP to lodge allegations with people, not foreigners

Suggesting the BNP to place its allegations before the country’s people instead of foreigners, Awami League general secretary Obaidul Quader on Wednesday said making any statement on the country’s sovereignty does not suit the BNP leaders, reports BSS. 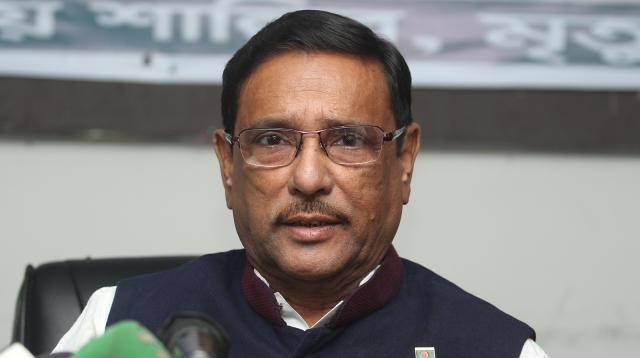 “BNP often complains to various embassies and holds meetings with embassy officials in the dark of night. The worlds of sovereignty of the country do not suit them. How will they protect the independence?” he said.

Quader, also the road transport and bridges minister, came up with the remarks while speaking at a virtual press briefing on contemporary affairs from his official residence here.

He said BNP secretary general Mirza Fakhrul Islam Alamgir commented that there was no practice of democracy in Awami League. “But, when the BNP was in power, the practice of the so-called BNP-branded democracy was seen in the party and the government,” he added.

The AL general secretary said those who were ousted from power through the people’s movement in 1996 are now giving lessons of democracy.

Making statements on democracy by BNP leaders is ridiculous as they are actually cheating the people in the name of democracy, he added.

Quader said enforcing curfew at night and failing to form committees of the party time and again are the BNP’s practice of democracy.

Although the BNP has been wearing the mask of democracy since its inception, the image of autocracy and opportunism repeatedly appeared on the faces of its leaders, he added.

The road transport minister said patronising and flourishing corruption through snatching the rights of people by establishing ‘Hawa Bhaban’ is the only success of BNP’s democracy practice.

Noting that BNP’s politics is not people-centric now, he said the party is now looking at the banks of the river Thames (London). “The BNP leadership has no capacity to take any decision, while they are just following instructions,” he added.

The family of Father of the Nation Bangabandhu Sheikh Mujibur Rahman is the symbol of integrity and sacrifice in the country’s politics, Quader said, adding: “In the politics of this country, the Awami League and Bangabandhu’s family are shining with the glory of sacrifice.”

On behalf of the party and the country’s people, the AL general secretary congratulated prime minister Sheikh Hasina for being nominated as the co-chair of ‘One Health Global Leaders Group on Antimicrobial Resistance (AMR)’ for next two years.

Police, along with 20 or 30 persons, raid homes of BNP leaders: Khasru

BNP has two aims, to reorganise and take up a movement